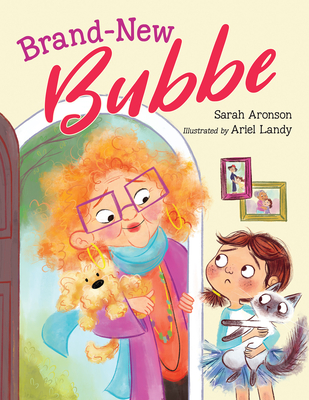 
Usually Ships in 1-5 Days
Jillian isn't so sure she needs a third grandma now that her stepdad is joining the family, but can her brand-new Bubbe win her over?

When Jillian joins Bubbe for some mom-mandated matzo ball soup making, she realizes she has room in her heart (and stomach!) for one more grandmother. But how can she convince Noni and Gram she still loves them just as much? A super soup celebration, of course! Chaos in the kitchen leads to matzo ball soup, spicy gazpacho, meatball soup, and a trio of grandmas united in their love for their family.

Complete with all three soup recipes, Brand-New Bubbe captures the warmth of blended family and honors the joys of cooking with the ones you love.

Sarah Aronson is the author of Just Like Rube Goldberg, the middle grade series, The Wish List, and YA novels Head Case, Beyond Lucky, and Believe. She holds an MFA in writing for children and young adults from Vermont College of Fine Arts.

Ariel Landy is an educator and illustrator of books for children, including This is the Church and The Riddle of the Wild Dogs. Landy began writing and illustrating stories as soon as she could hold a pencil and she never stopped. She currently lives in France with her husband and their dog, Sid.
https://www.ariellandyart.com/books
♦ "A skeptical girl overcomes hesitations to connect a blended family in Brand-New Bubbe, an interfaith celebration of open-mindedness and the unifying power of a good bowl of soup.
Jillian, happy with her theater-loving Noni and adventurous Gram, greets her new "really nice" stepdad's mother, the boisterous bubbe (Yiddish for grandmother), with outright hostility. "She didn't want [Noni and Gram] to feel left out. Or, even worse, replaced." Eventually Jillian's mom scolds her for her unwelcoming behavior and forces her into a matzo ball soup-making lesson. The delicious broth Bubbe cooks opens Jillian's mind: "Like soup, family was made with love. And there was always room for more." Understanding now that "family is more than blood," Jillian connects several generations of relatives over a homemade, multicultural meal.
Author Sarah Aronson (Just Like Rube Goldberg) offers an empathetic emotional arc for readers who might relate to changes in their family structure. Her presentation of a growing, global and interfaith family speaks to a broad audience, but her story is also culturally specific, highlighting Judaism and introducing the concept of machatunim, a Yiddish word for the relationship between in-laws. There is no English equivalent for the word, but the feelings connected are certainly universal. Illustrator Ariel Landy (Gitty and Kvetch) contributes cheerful characters with lively expressions through cartoonish artwork with soft lines and vibrant colors. The parallel relationship between Jillian's cat and Bubbe's dog adds a particularly humorous substory. Backmatter includes family resources and recipes for three soups. An adorably charismatic and accepting story honoring problem-solving and found families."

"Jillian likes her new stepfather but isn’t sure about her new grandmother.
Bubbe, Yiddish for grandmother, is very loving, but Jillian does not appreciate this affection. She already has two grandmas—Gram and Noni—and a great-grandma. She doesn’t need a person who gives lipstick-laden kisses and introduces new holidays and words (kvelling and kvetching) she doesn’t understand. When her mom insists that Jillian “give Bubbe a chance,” Jillian, tan-skinned with brown hair, reluctantly agrees to join her “brand-new” grandmother as Bubbe prepares soup and teaches Jillian to make perfect matzah balls. After tasting the delicious concoction, Jillian plans a celebration for everyone: her mother, her stepfather, her father, and all her grandmothers (and her great-grandma). The three grandmas make their special soups and create a feast for everyone—a lovely way to bring a blended family together. Humorous, expressive illustrations track Jillian’s many moods; the interactions between Bubbe’s dog and her cat are especially funny. Filled with good tastes and intentions, the story will ring true where families have stayed friendly after divorce and remarriage. Jillian’s family is a diverse one—Bubbe is Jewish, and the family members range in skin tone. Backmatter includes recipes for all three grannies’ soups (Bubbe’s matzah ball soup, Noni’s Italian wedding soup, and Gram’s gazpacho). (This book was reviewed digitally.)
A winning reminder that though family might evolve, it’s always anchored by love."

"When her mom remar­ries, Jil­lian gets a new step­dad and a new bubbe. Since she already has a Noni and a Gram, Jil­lian is not inter­est­ed in adding any­one else new to her fam­i­ly. Bubbe can’t seem to win Jillian’s affec­tions no mat­ter what she tries. But when she brings over the ingre­di­ents to make mat­zo ball soup, Jil­lian can’t resist.
After slurp­ing down a few bowls, she has an idea. Jil­lian invites all three of her grand­moth­ers — plus her dad and her great-grand­moth­er —for a ​'Super Soup Cel­e­bra­tion.' Noni makes Ital­ian meat­ball soup, Gram makes gaz­pa­cho and of course, Bubbe makes mat­zo ball soup. And, Jil­lian quick­ly real­izes, ​'Like soup, fam­i­ly was made with love. And there was always room for more.'
The final page spread shows Jillian’s preg­nant moth­er, and obser­vant read­ers will be delight­ed to dis­cov­er an adorable new sib­ling run­ning across the end­pages. Bright, col­or­ful, expres­sive illus­tra­tions depict a fun-lov­ing, con­tem­po­rary, mul­ti­cul­tur­al, and inter­faith blend­ed fam­i­ly. And it’s refresh­ing to see three bicy­cle-rid­ing and bas­ket­ball-play­ing grand­moth­ers: Bubbe with frizzy red hair and hip pur­ple glass­es; petite Gram in a styl­ish head­band, hik­ing boots, and shorts; and tall, slen­der Noni with a red beret and pearls.
All three soup recipes, with detailed instruc­tions, are append­ed along with a list of resources for inter-faith and blend­ed fam­i­lies. Sim­i­lar to Chick­en Soup, Chick­en Soup by Pamela May­er, illus­trat­ed by Deb­o­rah Mel­mon (Kar-Ben, 2016), and Tale of Two Seders by Mindy Avra Port­noy, illus­trat­ed by Vale­ria Cis (Kar-Ben, 2010), young read­ers who can per­son­al­ly relate to Jil­lian will feel val­i­dat­ed and seen, and all read­ers will dis­cov­er that ​'fam­i­ly is more than blood' and ​'there is no one right way to blend a fam­i­ly.' As Aron­son writes in her after­ward: ​'The only manda­to­ry ingre­di­ents for cel­e­brat­ing your fam­i­ly are patience, humor, and of course, lots and lots of love!'"