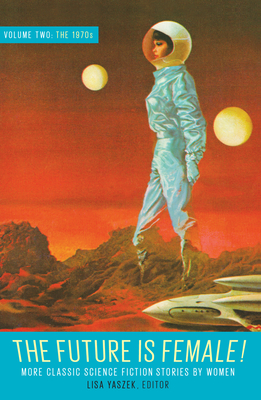 In the 1970s, feminist authors created a new mode of science fiction in defiance of the “baboon patriarchy”—Ursula Le Guin’s words—that had long dominated the genre, imagining futures that are still visionary. In this sequel to her groundbreaking 2018 anthology The Future is Female!: 25 Classic Science Fiction Stories by Women from Pulp Pioneers to Ursula K. Le Guin, SF-expert Lisa Yaszek offers a time machine back to the decade when far-sighted rebels changed science fiction forever with stories that made female community, agency, and sexuality central to the American future.

Here are twenty-three wild, witty, and wonderful classics that dramatize the liberating energies of the 1970s:

Lisa Yaszek, editor, is Professor in the School of Literature, Media, and Communication at Georgia Tech and past president of the Science Fiction Research Association. She is the author of Galactic Suburbia: Recovering Women’s Science Fiction (2008), and coeditor of Sisters of Tomorrow: The First Women of Science Fiction (2016); she currently serves as a juror for the John W. Campbell Memorial Award for Best Science Fiction Novel of the Year and the Eugie Foster Memorial Award for the Best Speculative Story of the Year.
“But for my money, the sci-fi event of the season is the second volume of the Library of America’s absorbing “The Future is Female” series. This installment focuses on short stories by women of the 1970s, the heyday of Ursula K. Le Guin and James Tiptree Jr., the pseudonym of Chicagoan Alice Bradley Sheldon.” —Christopher Borrelli, Chicago Tribune

"Yaszek has come up with a great mix . . . the real treat is in discovering some terrific but less well-known works by authors now largely forgotten." —Alex Good, The Toronto Star