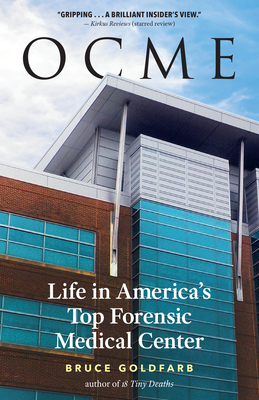 Go behind the scenes inside the nation's preeminent Office of the Chief Medical Examiner, where good people fight the good fight amid the tragedies and absurdities of our age

Perfect for fans of Michael Lewis and David Simon (Homicide, The Corner, The Wire, We Own This City)

Real life is different from what gets depicted on procedural crime dramas.

Equipped with a journalist’s eye, a paramedic’s experience and a sardonic wit, Bruce Goldfarb spent ten years with Maryland’s Office of the Chief Medical Examiner, where every sudden or unattended death in the state is scrutinized.

Touching on numerous scandals, including Derek Chauvin's trial for the murder of George Floyd and the tragic killing in police custody of Freddie Gray, Goldfarb pulls back the curtain on a pioneer institution in crisis.

Medical examiners and the investigators and technicians who support them play vital roles in the justice and public health systems of every American community. During Goldfarb’s time with the Maryland OCME, opioid-related deaths contributed to a significant increase in their workload. Faced with a chronic shortage of qualified experts and inadequate funding, their important and fascinating work has become more challenging than most people could ever imagine.

The public gets a skewed view of the relationship between police and medical examiners from procedural crime dramas, Bruce Goldfarb writes of his work inside one of America's most storied forensic centers. We aren’t on the same team . . . We aren’t on any team. The medical examiner’s sole duty is to the deceased person. We speak for the dead.

"An engrossing and accessible chronicle of . . . the early years of scientific detection." — The Wall Street Journal

"Devotees of TV's CSI will have their minds blown." — Publishers Weekly (starred review)
A former EMT/paramedic and a nursing school dropout, Bruce Goldfarb has written for national and local newspapers, magazines, and web publications. He also wrote and edited several medical texts and reference books. He is the author of 18 Tiny Deaths: The Untold Story of the Woman Who Invented Modern Forensics and served from 2012 to 2022 as the executive assistant to the chief of OCME Maryland. He lives in Baltimore.
"A brilliant insider’s view of a critical yet vulnerable government agency."
--Kirkus Reviews (starred review)

“In this powerful autopsy of autopsies, Goldfarb, a former journalist and emergency medical technician who spent a decade as the public information officer for the Maryland Office of the Chief Medical Examiner, reveals how the opioid crisis, budget shortfalls, and insufficient staff have contributed to a demoralizing crisis.”
--Booklist

"An engrossing and accessible chronicle of . . . the early years of scientific detection."
--The Wall Street Journal

"Devotees of TV's CSI will have their minds blown."
--Publishers Weekly (starred review)