The War Girls: A WW2 Novel of Sisterhood and Survival (Paperback) 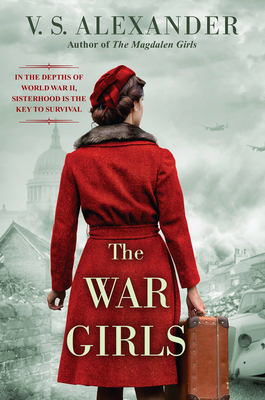 The War Girls: A WW2 Novel of Sisterhood and Survival (Paperback)


Usually Ships in 1-5 Days
Perfect for fans of Kate Quinn, Kristin Harmel, and Pam Jenoff, this new historical fiction novel from an acclaimed author is based on true WWII stories of life in the Warsaw Ghetto during the Occupation and the women who served the Allies as agents and spies. Casting light into one of the darkest periods of World War II, this powerful book tells of two Jewish sisters– one imprisoned in Poland and the other who joins the Special Operations Executive in a daring attempt to free her family from the Nazis.

It’s not just a thousand miles that separates Hanna Majewski from her younger sister, Stefa. There is another gulf—between the traditional Jewish ways that Hanna chose to leave behind in Warsaw, and her new, independent life in London. But as autumn of 1940 draws near, Germany begins a savage aerial bombing campaign in England, killing and displacing tens of thousands. Hanna, who narrowly escapes death, is recruited as a spy in an undercover operation that sends her back to her war-torn homeland.

In Hanna’s absence, her parents, sister, and brother have been driven from their comfortable apartment into the Warsaw Ghetto. Sealed off from the rest of the city, the Ghetto becomes a prison for nearly half a million Jews, struggling to survive amid starvation, disease, and the constant threat of deportation to Treblinka. Once a pretty and level-headed teenager, Stefa is now committed to the Jewish resistance. Together, she, Hanna, and Janka, a family friend living on the Aryan side of the city, form a trio called The War Girls. Against overwhelming odds and through heartbreak they will fight to rescue their loved ones, finding courage through sisterhood to keep hope alive . . .

Praise for V.S. Alexander and The Sculptress

“Fans of Alena Dillon, Lucinda Riley, and Alexander’s previous work will appreciate the historical accuracy saturating every page of this moving, compassionate novel.” —Booklist
V.S. Alexander is an acclaimed historical fiction author whose novels include The Taster, The Irishman’s Daughter, The Magdalen Girls and The War Girls. An ardent student of history with a strong interest in music and the visual arts, some of his writing influences include Shirley Jackson, Oscar Wilde, Daphne du Maurier, or any work by the exquisite Brontë sisters. V.S. Alexander lives in South Florida and can be found online at VSAlexander.com.