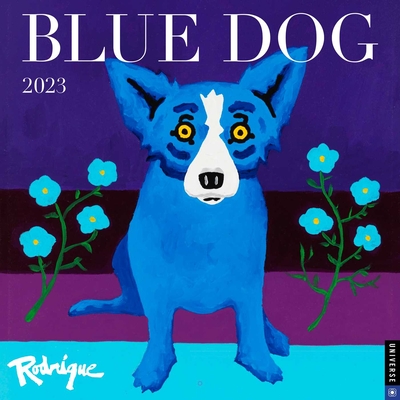 
Special Order
George Rodrigues's Blue Dog is one of the most recognizable images in the world of contemporary art. The Blue Dog 2023 Wall Calendar features 12 images that will appeal to both longtime and new fans and collectors.

Steeped in the legends and Cajun myths of Rodrigue’s Louisiana upbringing, Blue Dog catapulted to worldwide fame in the early 1980s, and has never looked back. Enjoy twelve months of the adorable Blue Dog with this charming 2023 wall calendar.
• Featuring 12 full color photographs of the popular Blue Dog
• Bonus spread for September–December 2022
• Generous grids for adding appointments and reminders
• Includes major official world holidays
• Opens to 12 inches x 24 inches
George Rodrigue (1944–2013) was born and raised in Cajun Country, Louisiana. His studies at the Art Center College of Design in Los Angeles spawned one of the greatest success stories in American art. From the late 1960s forward, he portrayed on his canvas what he feared was his dying heritage—including its land, people, traditions, and mythology. His Blue Dog Series, based on the French-Cajun loup-garou legend, catapulted him to worldwide fame, while his dark Renaissance-like landscapes developed into robust modern masterpieces. Rodriogue museum exhibitions set attendance records across the country.