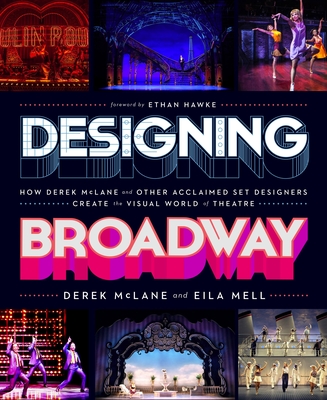 
Usually Ships in 1-5 Days
In this richly illustrated and information-packed celebration of Broadway set design, Tony Award–winning designer Derek McLane explores the craft while reflecting on some of the greatest stage productions of the past few decades.

Together with other leading set design and theatre talents, McLane invites us into the immersive and exhilarating experience of building the striking visual worlds that have brought so many of our favorite stories to life. Discover how designers generate innovative ideas, research period and place, solve staging challenges, and collaborate with directors, projectionists, costume designers, and other artists to capture the essence of a show in powerful scenic design.

Filled with personal sketches and photographs fromthe artists’ archives, this stunningly designed book is truly a behind-the-scenes journey that theatre fans will love.

Derek McLane is an Emmy and Tony Award–winning set designer for Broadway and television with more than 350 designs to his credit. Broadway productions include Moulin Rouge! and 33 Variations(Tony Awards), A Soldier’s Play (Tony nomination), American Son, How to Succeed in Business Without Really Tryingand Anything Goes. Derek is additionally the recipient of two Obies, two Drama Desk Awards, three Lucille Lortel Awards, and three Art Directors Guild Awards. Television credits include six years designing sets for theAcademy Awards and NBC live musicals: The Sound of Music, Peter Pan, The Wiz, and Hairspray. He is currently chairman of the board of The New Group, an off-Broadway theatre company. For the last twenty years, Derek has also been a mentor for Theatre Development Fund’s Open Doors program, taking New York City high school students to Broadway shows. Derek currently resides in New York with his wife, Broadway producer Lia Vollack.

Eila Mell is an entertainment and fashion writer who has interviewed the likes of Donna Karan, Gbenga Akinnagbe (the Trayvon Martin Foundation), Martha Stewart, and Tommy Hilfiger. Her book credits include Project Runway: The Show That Changed Fashion and New York Fashion Week: The Designers, the Models, the Fashions of the Bryant Park Era. She has been featured on CBS’s The Insider, in the New York Times, Marie Claire, Glamour, People StyleWatch, Page Six, and in the documentary Scatter My Ashes at Bergdorf’s.